After a short break the gang is back into the swing, with rails being today’s task. 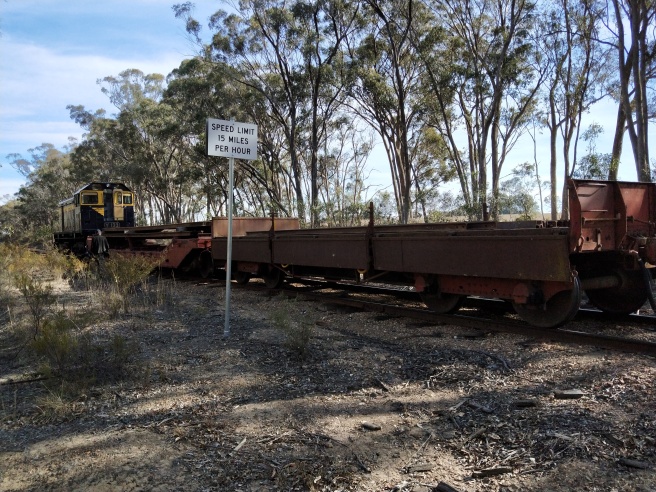 Primarily the task was to drop out more 80lb rail, however we used the same opportunity to collect another 60 odd lengths of the already disassembled 60lb rail from curve 20. 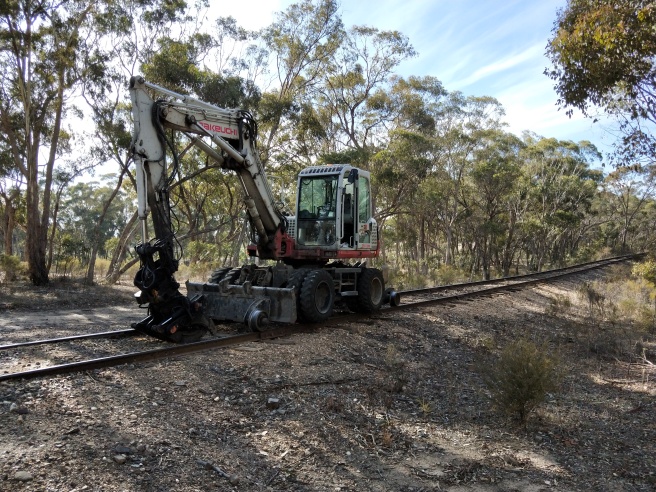 A task which took no time with our mighty digger. 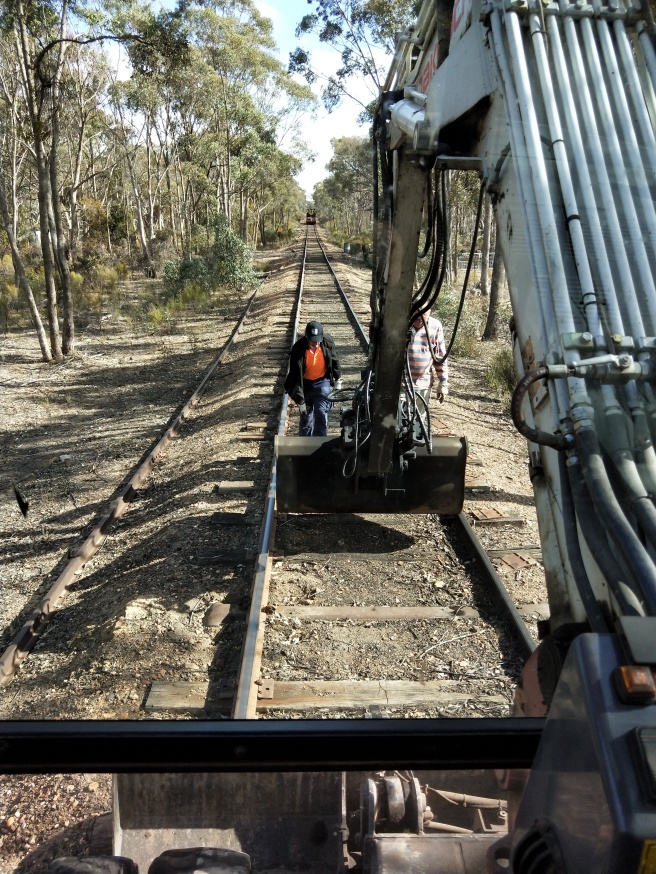 The drop out zone for the 80lb was tangent 20-21, starting at Bendigo Rd and running towards Castlemaine. 33 rails were dropped out to begin the works along the UP leg (the down leg being the previous re-railing job).

We still needed to collect some jewellery from last time and scrape some rock before we could drop the rails.

The plan, weather permitting (it’s finally looking like rain!) is to prepare as much of this as possible Thursday (bolting together and material drop out etc…) and maybe even make a start if the rains don’t eventuate. 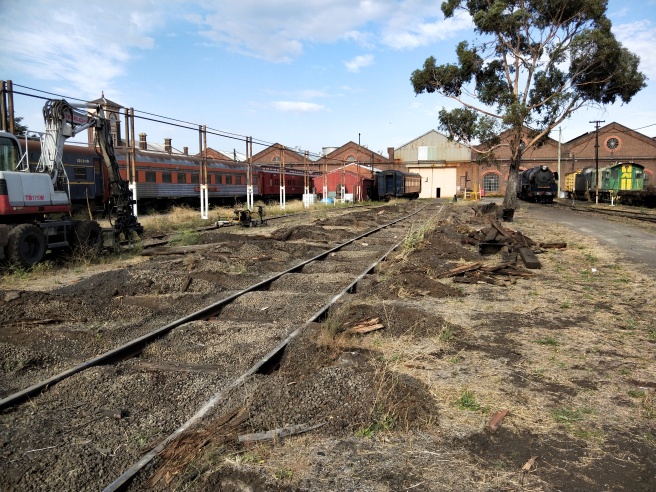 It’s been a long and very busy couple of days.

With 4a & b roads dogged up, 5 road re-sleepering completed. Then the almighty clean up! 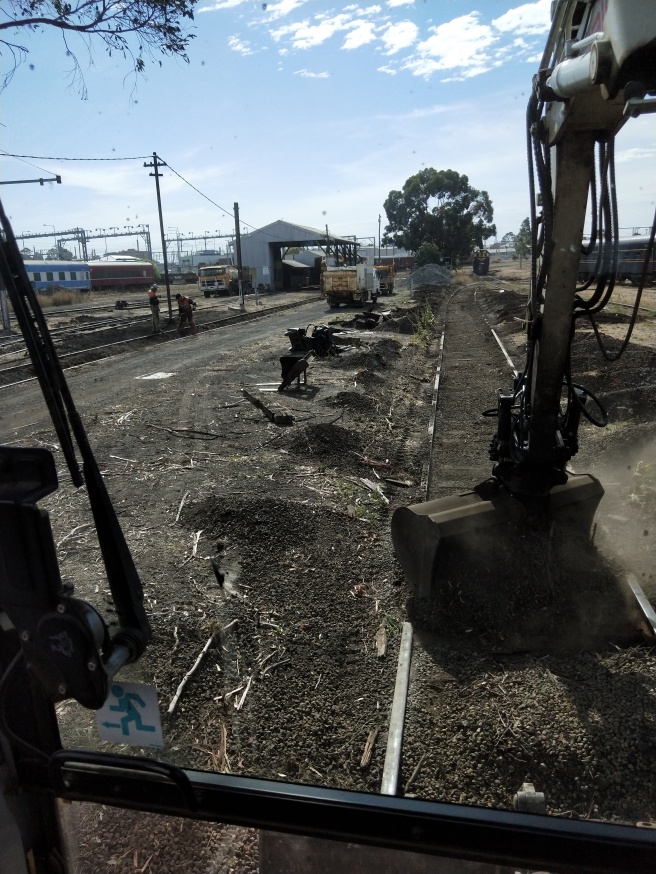 Lots of scraping ballast brought the site looking quite reasonable once again.

Bazz looks on after the last sleeper was installed into 5 road.

The crossover section between 5 and 5a was also reconditioned.

By the end of today all the timber had been stacked onto the loco light up pile with all the worksites tidied up and looking very respectable.

It’s been a massive job, with over 30 point timbers, close to 200 sleepers and an enormous amount of work for each and every one… All in only 8 days!

A big thank you to all of our hard working gang for the long hours and dedication, we couldn’t do any of these vital jobs that help to support our own railway.

After a massive few weeks, we’re taking a break next week. All the usual gangs will be running again in a fortnight.

Today saw a lot accomplished, with 6 road almost completed, only a final tamp of a few sleepers needed and a final scrap to tidy up the ballast. 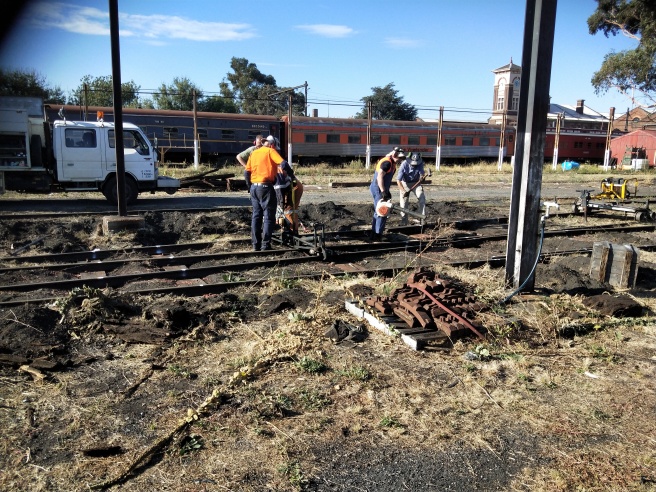 Turnout 20 was also finished off, with lots of attention paid to the joints and potential trouble spots.

Road 4b was next with around 40 sleepers pulled and inserted. We have even spiked them all on one side ready for gauging tomorrow. 4b has certainly proved to be the worst section of the yard, after tomorrow the whole yard should be quite respectable. While 4a however only required 4 replacements! 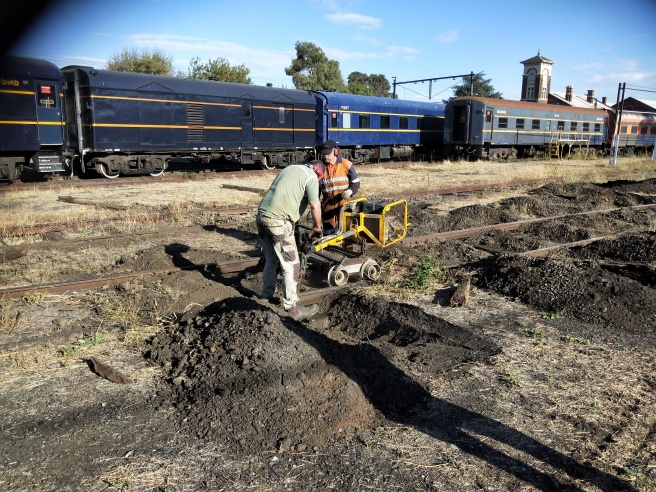 The big down side of yards is the vast amount of dirt (ballast) that needs moving to do any work. Poor Clive had to shift quite a bit by hand just to get the spike driver through.

Another stunning day’s work by the gang, putting us well on track for our Thursday finish. Any extra hands would still be welcomed on our last two days.

It’s a new week and we’re back into the jobs at Newport with a vengeance.

Turnout 20 (an old 60lb turnout) was our victim today, with lots of obstacles needing avoiding, it was fairly slow going, but all the new timber is now under.

It’s never easy or quick work in a yard, but some of the older areas of Newport are particularly bad for access, all part of the fun though.

6 Road was the other recipient of today’s attention. With 30 sleepers installed on Friday spiked up and a further 15 unspiked and trenches dug ready for their removal first thing tomorrow.

We’ve still got a bit to go and only 3 days left now, so it would be great to get any extra hands on site, we’re looking pretty good for tomorrow but Wednesday / Thursday is looking quite lonely, if you happen to be able to spare even just a few hours we’d really appreciate it.

The gang joined us down at sunny Newport today, for what can only be described as a pretty massive effort!

Lots of gauging and driving dog spikes, first into sleepers and then onto point timbers during the afternoon.

As we were working in sidings, we’d periodically need to shunt the rolling stock out of the way, giving the gang a well earned breather.

It’s nice to feel at home sometimes, so steamrail thought they’d do what they could and had a K class in steam trundling around. 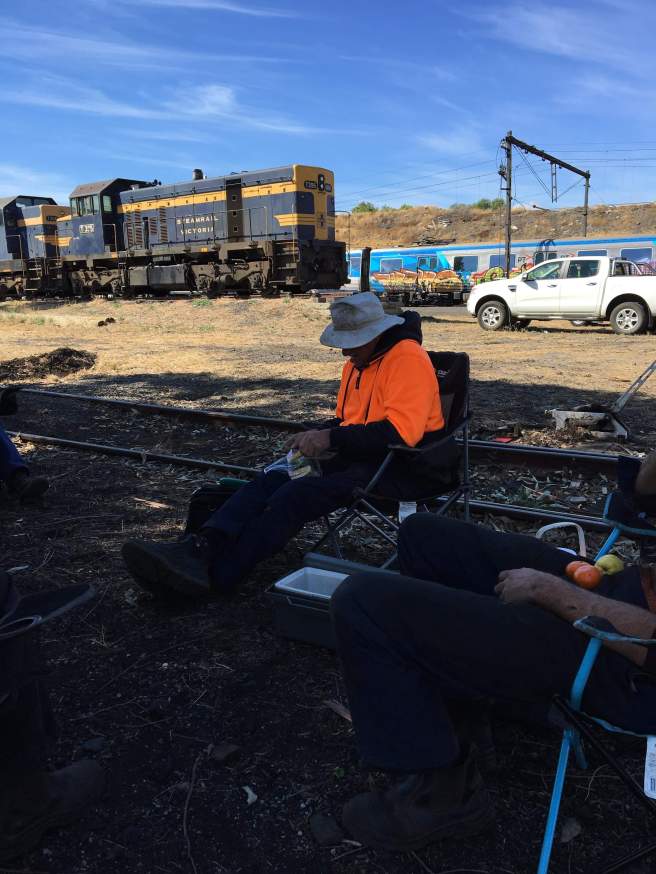 Today’s highlight was easily lunch time…. John discovered his hard boiled egg had missed it’s turn in the saucepan. He had to resort to sandwiches after he made a good mess cracking his raw egg all over his lunch box! 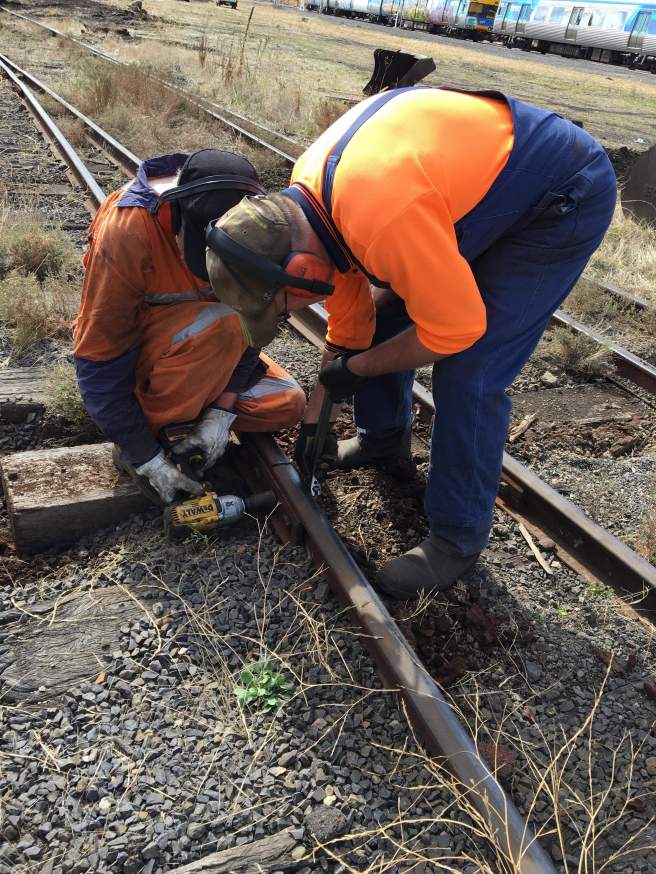 Lots of bolt tightening was also undertaken, another good use for the new electric rattle gun.

We inserted around 20 point timbers today, not a bad effort at all considering the cramped and awkward locations, over half have been spiked up.

Apart from one burst hydraulic hose, the job is progressing nicely.

We’re even giving the truck a holiday, by storing it under cover.

We’ll be back tomorrow, with mainly sleepers to go now.

Well we’re back at Newport and we haven’t wasted any time in making a mess of their yard.

Our small gang attacked 2 road today, 15 sleepers replaced and tied up and many more prepared. The other roads and several turnouts over this side of the yard will be done over the next two weeks.

We’re quite low on numbers so any assistance, even just half a day would be greatly appreciated, please contact ganger@vgr.com.au if you’re interested.

A very exciting bit of action today with two Franna’s on site to move the old guards van body.

Actually it was a bit of a non event, it was all over in about 30mins, nicely levelled and at home about 300m north of here.

The cloud of dust is the van about to be touched down in its new home. It certainly opened up the area and shows just how large our new engine shed will be! 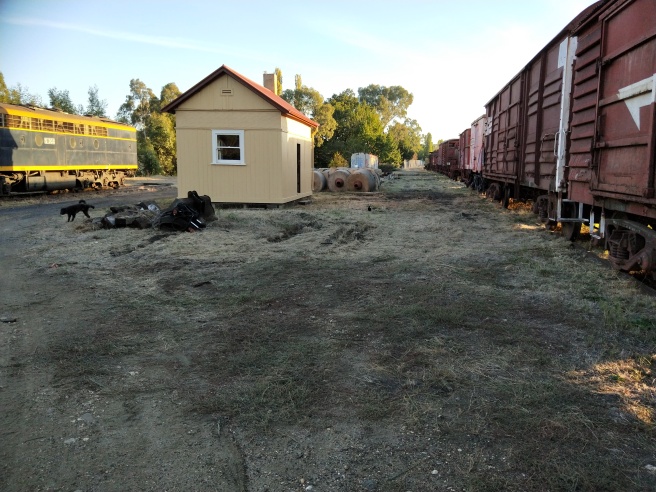 As promised a few more shots of the much cleaner yard. 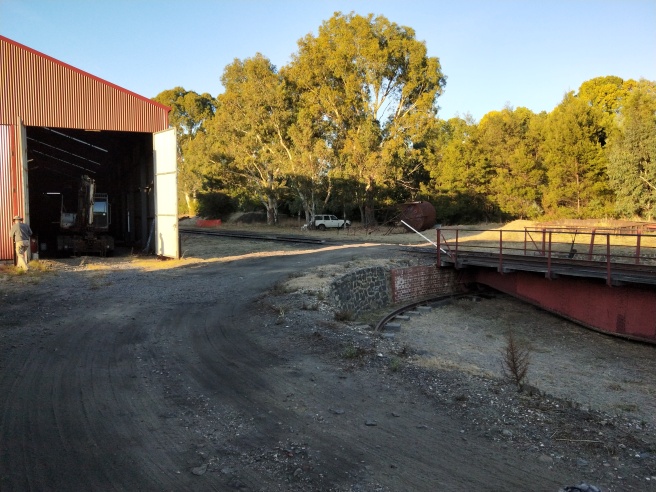 As part of these works we lose our current access roadway, so we spent some time removing the old sleepers from 5 siding ready to make way for our new roadway.

It’s all starting to happen and it’ll be very exciting once the building works start. 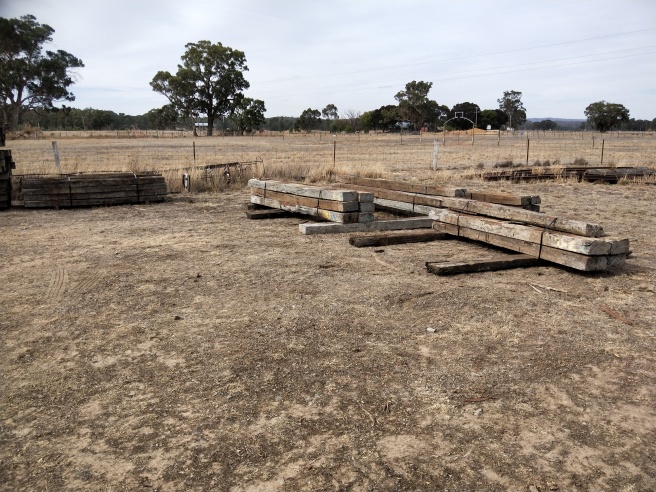 The next two weeks (starting Tuesday) will be more work for Steamrail down at Newport. Some of our recently removed timber sleepers will be heading down too to help complete the works. Seen here at Muckleford ready for transport.

If you’re Melbourne based and looking to spend some time on our gang, the next two weeks would be not only a great opportunity but it would be greatly appreciated! Please contact ganger@vgr.com.au if you’re interested.