As promised, Bridge work has been the aim of the game this week.

The early part of the week was spent installing shoulder packing wherever a gap existed between a pile and crosshead, all of this was on Muckleford Creek Bridge. Some of these gaps date back many years, but now we’re on top of the urgent jobs we can attend to these things. 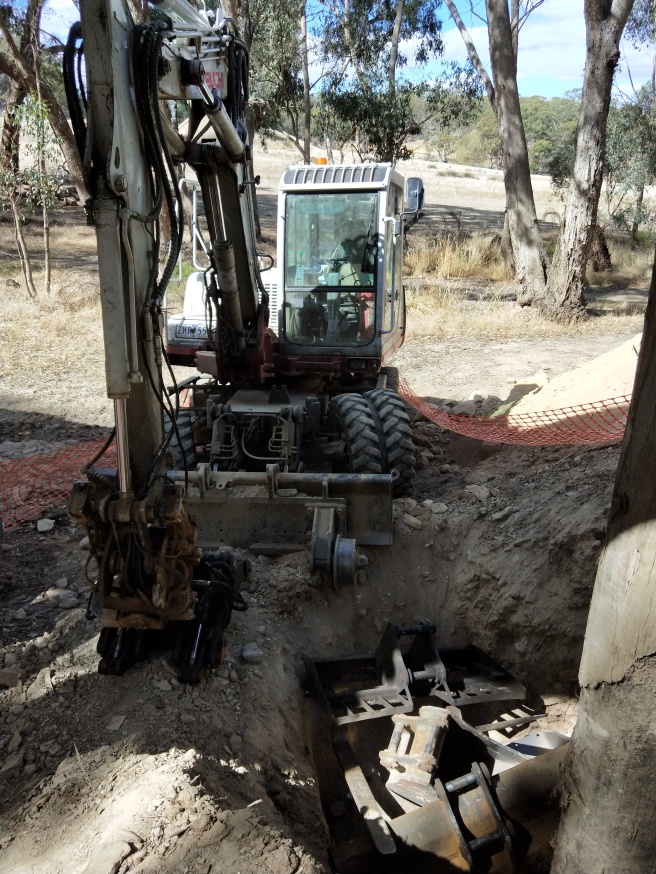 The main job however has been investigating a sinking pile at Rifle Range Bridge. Pile 2R had settled a little more than usual, so an exploratory dig was undertaken to find the cause. (we kept out buckets and other attachments safe by storing them overnight in the hole)

Today’s effort was to investigate the sinkage and correct it. But… a flat tyre on the bridge kit trailer slowed us down a little, nothing a quick change couldn’t fix however.

It’s mid February and we’re experiencing glorious winter mornings, a chilly 4 degrees this morning as the gang arrived on site.

The fault became obvious quite quickly. The whalers were less than ideal and to make up a slight pile length discrepancy some packers had been used (not an unusual practice), however these packers had decided they’d done the job long enough.

The sill really wasn’t much better, so it was renewed while we had access.

New whalers (thicker) were fitted to the pile, here the pile is jacked and blocked to allow the change, before renewing the sill.

The newly fitted whalers and sill, looking far too nice to bury. Again some packers were needed to make up the difference, but much more sturdy and better quality timber was chosen. As well as being heavily dosed in chemical preservative. They should see all of us out now.

The big issue with the settling was a big kink/dip in the track just on this end of the bridge, which was completely removed by correcting the fault. Another kink slightly further along was also removed while we were there, but that was just a case of moving the track, a much simpler solution.

To do our various works, we hired an elevated work platform, an essential tool for this sort of thing.

It’s use here was to allow the fixing of screws up through the runner into the decking. This is because we’ve been having pieces of decking ‘wandering’ out, not quickly but not the most ideal situation.

They’re easily corrected with a gentle push by the digger, but a permanent solution is always better.

The runner is the small piece of timber running along the beam, to allow the kerbing to be bolted down.

We simply drilled a clearance hole through the runner at every piece of decking and installed a small coach screw, they serve no purpose but to prevent lateral movement from vibrations, so should be more than suitable for the job.

Unfortunately we ran out of screws, as did Castlemaine and the all nearby hardware stores, so that job and the same thing at Winters Flat and Sawmill Road will occur when we get more.

The gang will be back at it tomorrow, meet at Maldon at 8am.