Over the coming weeks we will increasing the speed limits over much of the railway. In reality we’re actually just removing lots of temporary speed restrictions!

All the re-railing works, recent tamping works and re-sleepering have got the track up to a much higher standard. This is a real credit to all the volunteers who have put in all the hard work.

With the upcoming increase in speeds, a few test trains have been run to the new speeds to determine any areas of ‘rough’ track. All the previously known rough spots had been tended to, but faster speeds did highlight a few to attend to.

None of them were major but were still noticeable from a locomotive. The first was a small dip near Bendigo Road Crossing.

After a tamp and boxing up it looked much better.

All the locations tended to today were between here and Muckleford and although a whole lifetime could be spent getting every last little dip out, it is well and truly now fit for rhe purpose.

Here’s a before and after of what we attended to. Near Donkey Farm Track was this bad dip, particularly in the closest rail. John’s digging out room to install jacks. 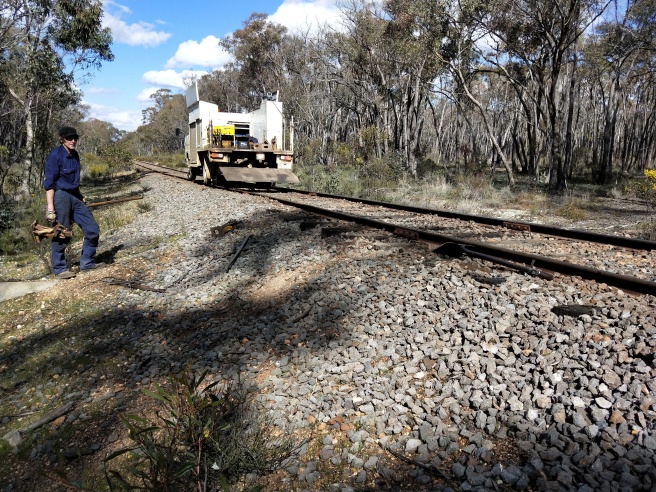 Not really a perfect after shot as the angle is different but it is noticeably less dipped. These are fairly quick jobs that hopefully now our track is in much better condition we can dedicate a bit more time to.