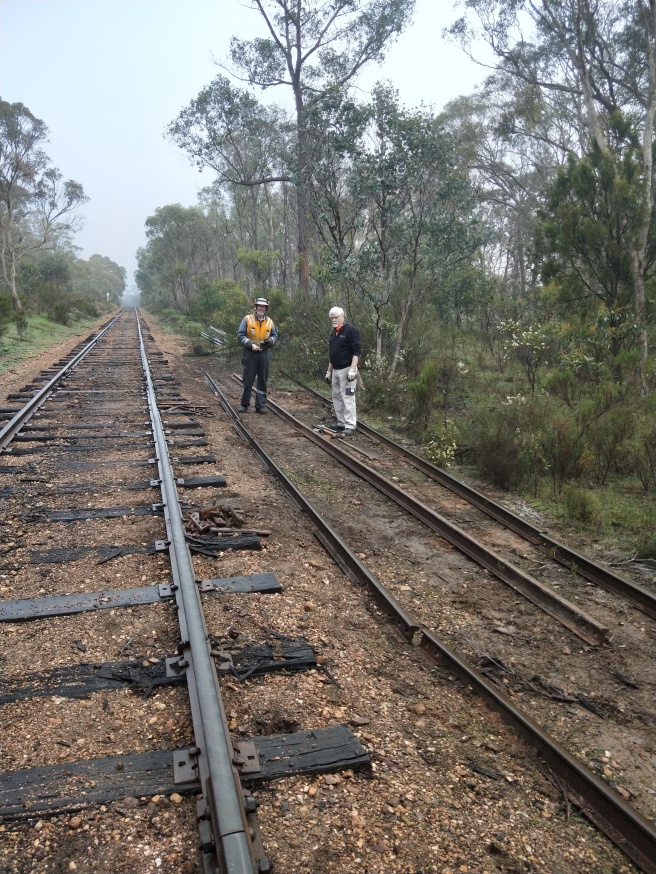 Well we finished breaking up the 60lb near Bendigo Road this morning.

We only had about 25 lengths to separate, which was a comfortable number for our small gang of 3. 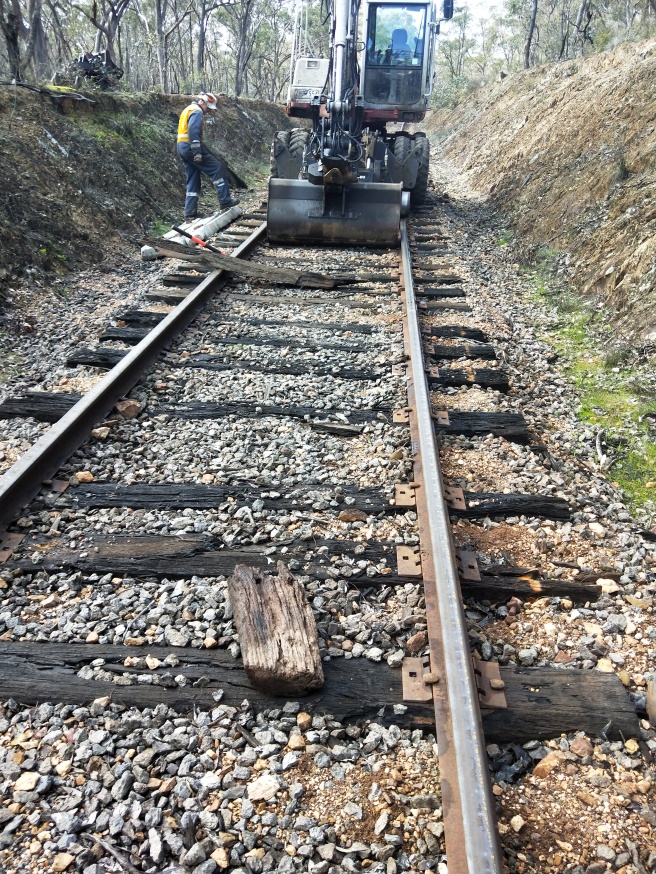 In the afternoon however we set about replacing the 3 sleepers in a row which had been marked as failed in curve 16.

However we very quickly decided that the marks should not have been on all three sleepers, rather just 2, as 1 was still in very good condition.

So we replaced those two and picked on two other nearby failures. As we happened to have a few concretes nearby, they were our insertion of choice. 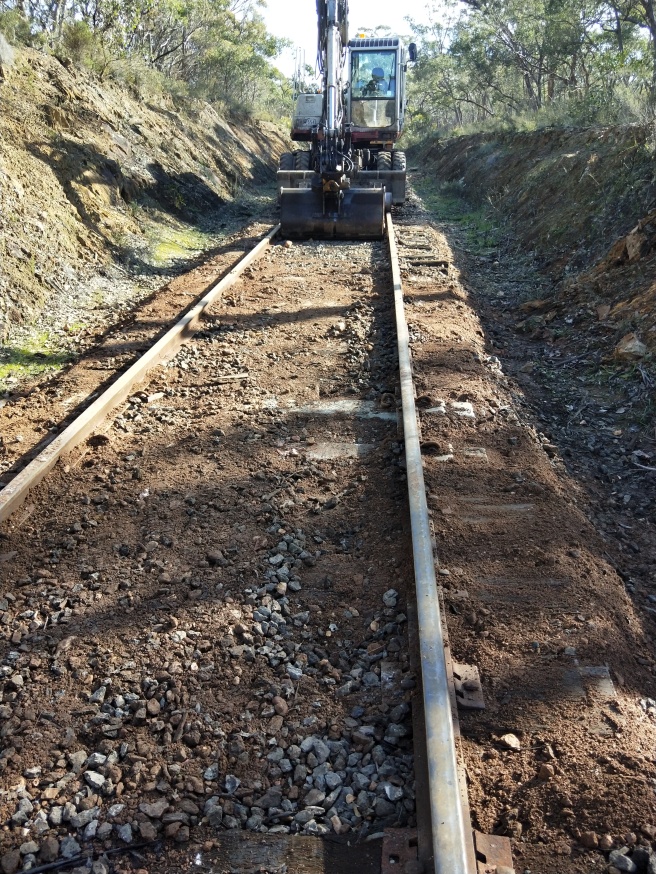 It’s also a good test to see how concrete will go in this poorer ballast, so far we’ve been very impressed that we’ve seen no signs of pumping or working in similar conditions.

Unfortunately however…. We did break one of the grab hydraulic lines on the digger just after inserting the first concrete sleeper! Which meant we had to install 3 without grabs and in a cutting.

Some cleaver and gentle manouvering with the forks ended up being quite successful, will all 4 clipped, hand packed (because the digger couldn’t operate the tamper while broken) and boxed up before the spare part arrived back! A quick visit on Monday will see these receive a proper tamp.

We’ll have gangs running on Tuesday, Thursday and Friday next week, where we will be tackling re-railing in tangent 20-21. 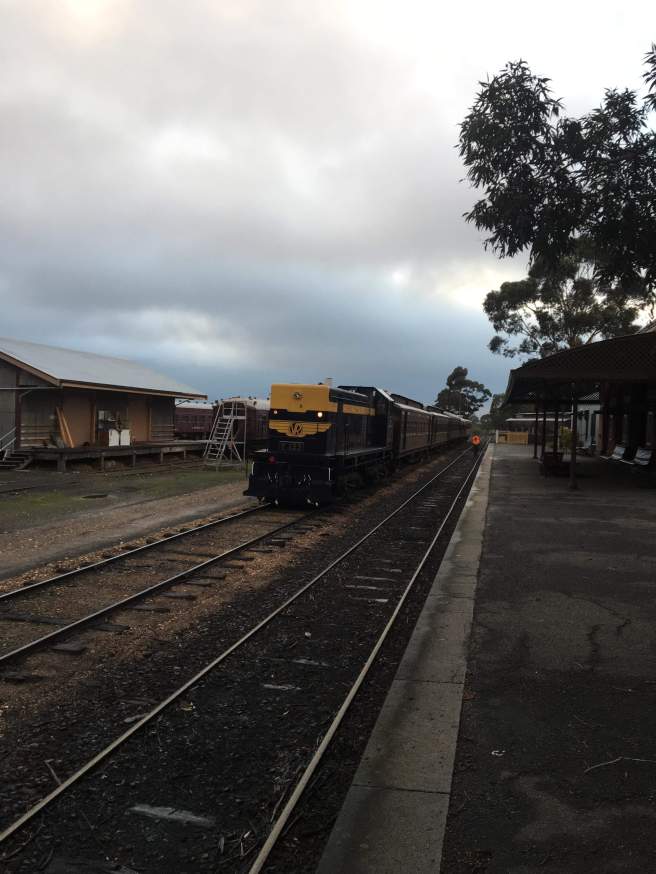 Due to the predicted rain for today we chose to stay close to shelter in Maldon yard. Luck we did because we had quite a bit more rain fall than was predicted. 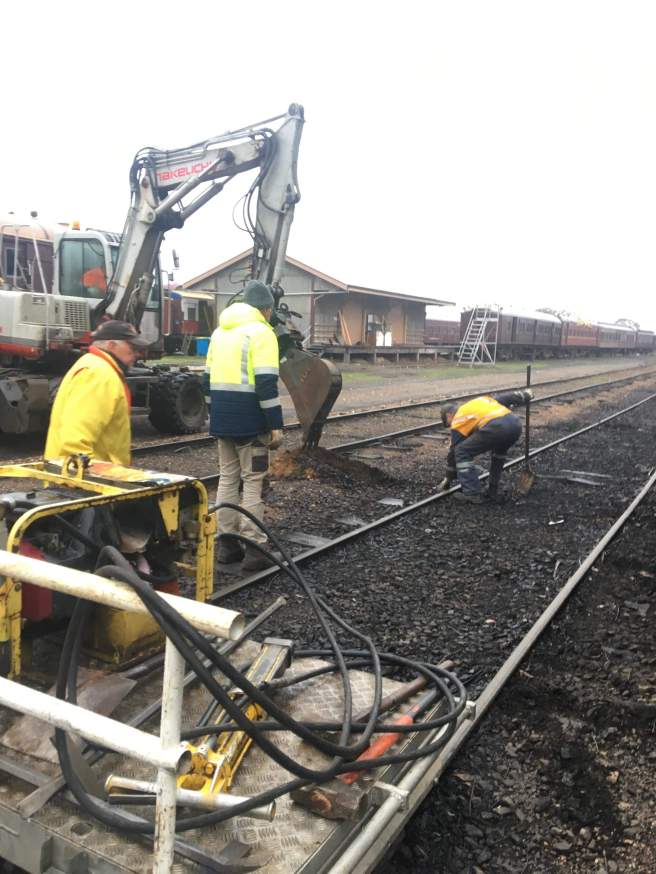 The target work was sleepers in 1 and 2 roads, meaning we had to keep moving the rolling stock around the yard to get access. 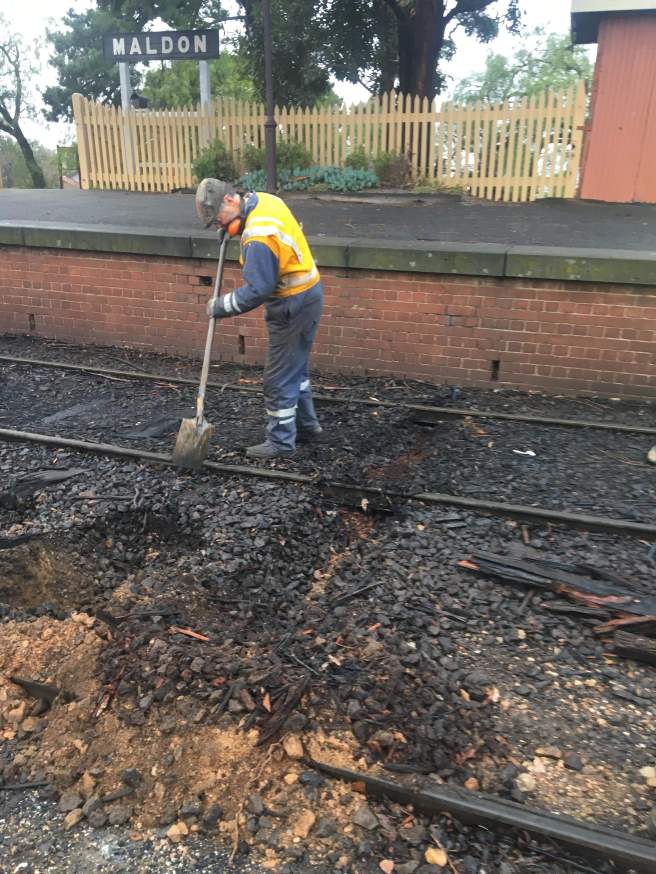 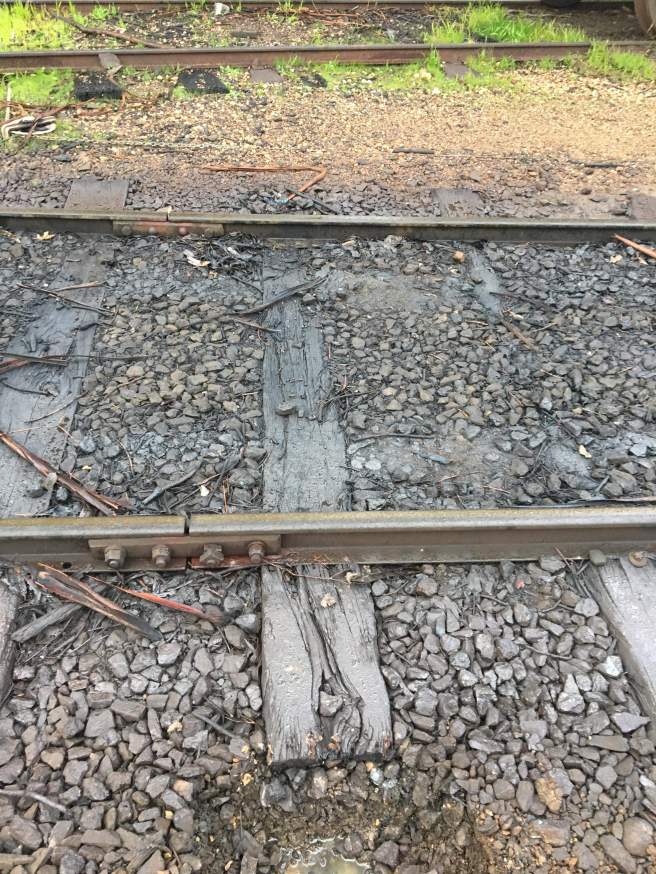 9 sleepers today we’re replaced in the platform. Generally the condition, although not new, is actually reasonable, but we had a couple of broken sticks which always just look terrible, especially at a station.

We’ve not replace any timber in 1 road since before we pulled 2 road across last year, and it’s amazing how much easier it was this time with those few extra inches of clearance. 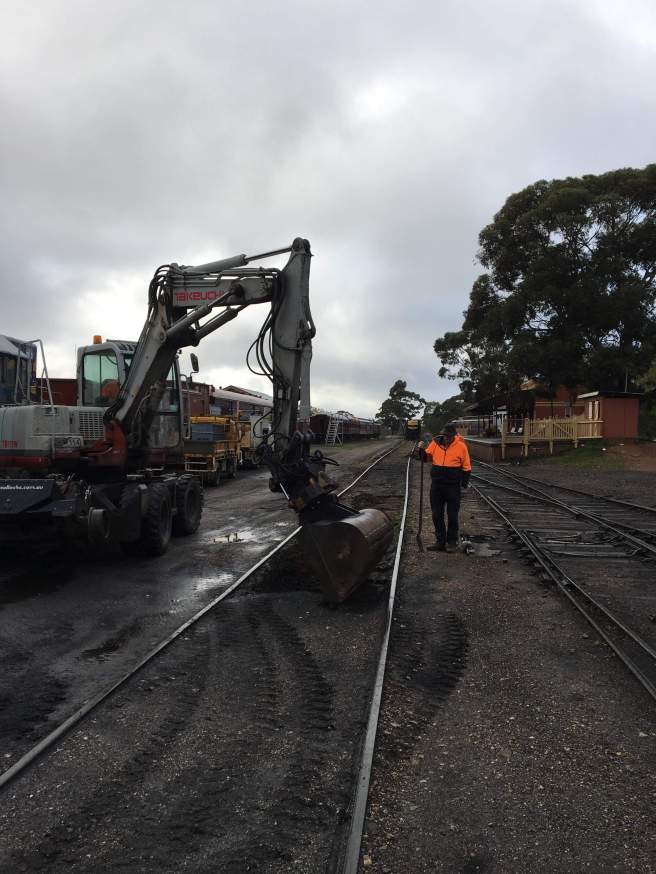 We even dared to look under areas of 2 road that haven’t seen daylight for many years, pleasingly not as bad as we had expected. 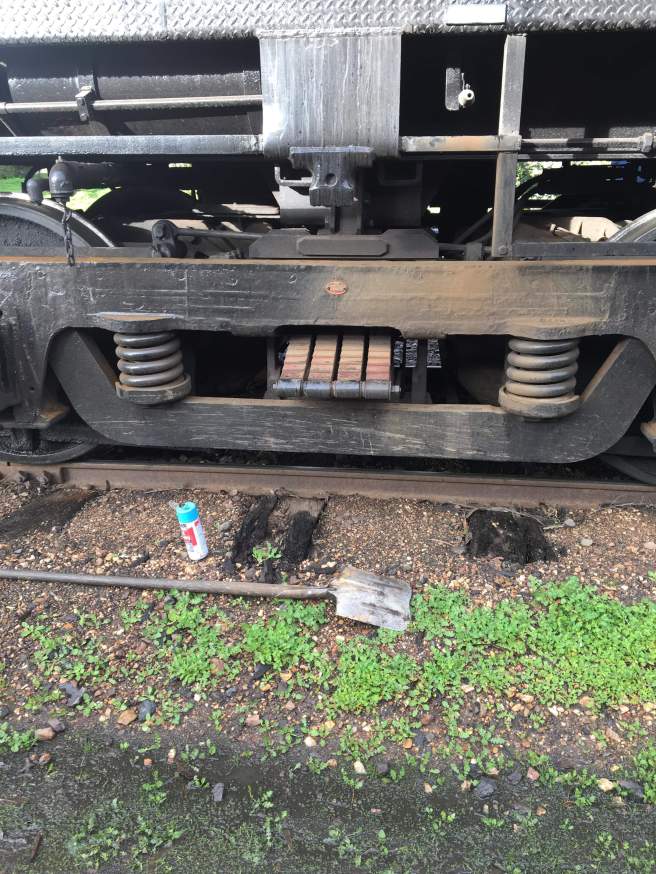 And without fail, we managed to park the loco on top of a sleeper to be replaced! We did quite a few moves today until we found a good spot to hide the train away. 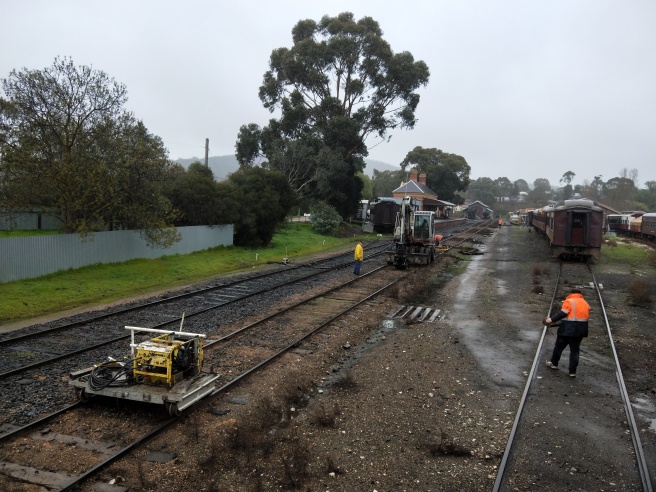 The mess we created is quite impressive! Thankfully that’s what tomorrow’s for. We managed to fasten up everything we put in today, which totalled around 34 (it was too wet to do a precise count so we’ll do that tomorrow). 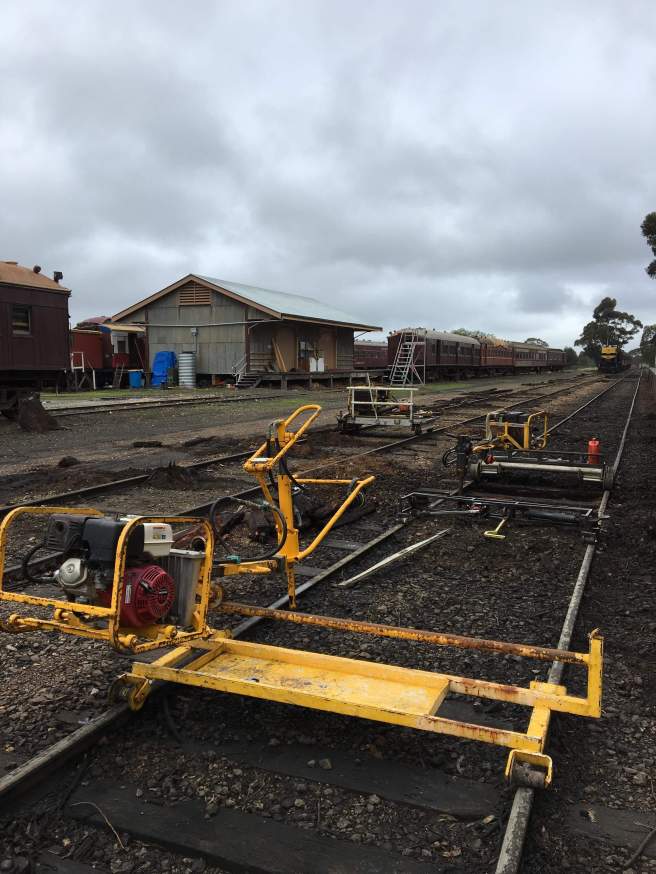 We got to test out our new hydraulic sleeper drill, and what a ripper it is! It attaches onto the same power packs used by the spiking hammer and pandrol clipper, making our kit very versatile. This drill has both forward and reverse, a very important feature. This will no doubt speed up re-railing greatly.Tomorrow we’ll be back at Maldon, still needing to ballast and tamp all of today’s work, as well as clean up all the mess, hopefully the weather is a little kinder. Meeting Maldon Yard from 8am 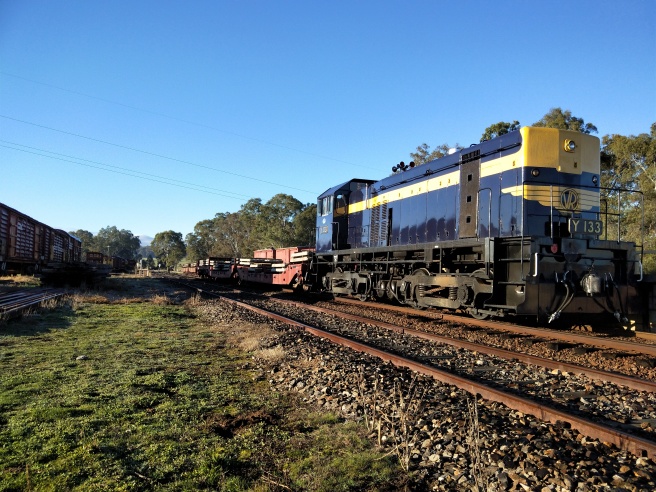 This is officially the biggest train of concrete sleepers we’ve run out to date. 272 sleepers in total, spread over 5 wagons.

It looked very impressive glimmering in the early morning dew. 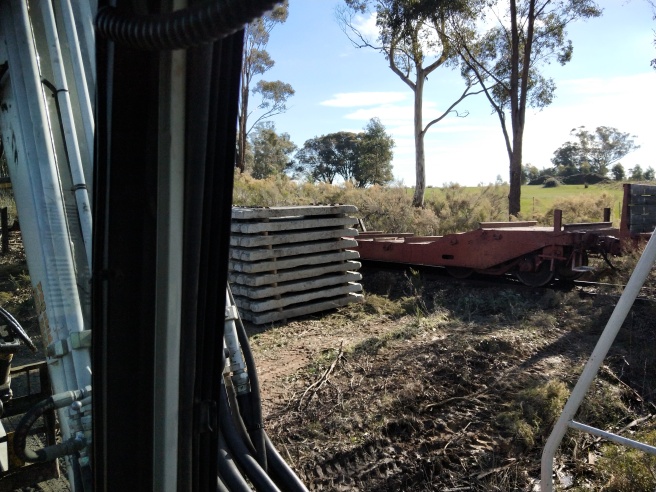 The drop out points were up the hill from Farmers Bridge. Around 300 are needed here to complete this straight, so once we’ve got this lot distributed we’ll know exactly how many more are required. Needless to say unloading all of these took quite a few hours.

The afternoon was spent preparing for re-railing next week. Lots of fish plate lubrication and bolting up into stings as well as removing the last few anchors.

We’ll have gangs running Tuesday, Thursday and Friday next week for anyone interested in joining. 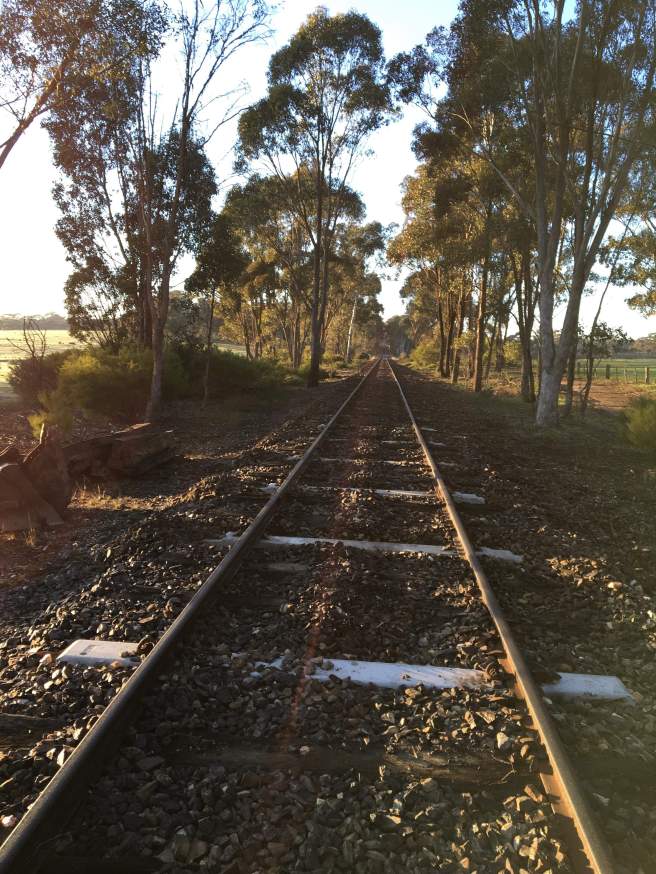 98 concrete sleepers were clipped up today, the 74 inserted Tuesday and 24 more from today. 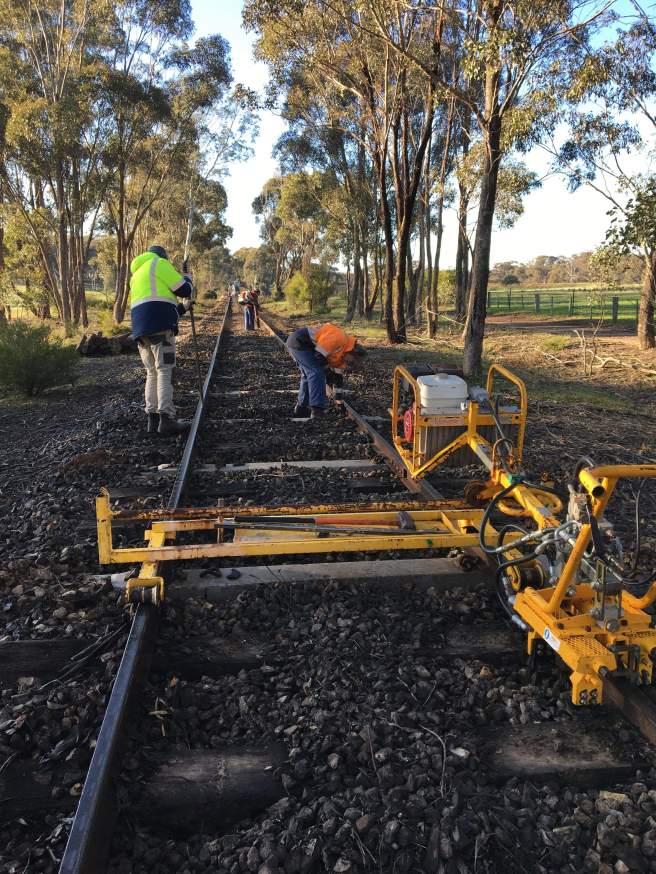 We made use of our new petrol clipper, which the gang is getting very quick with now. 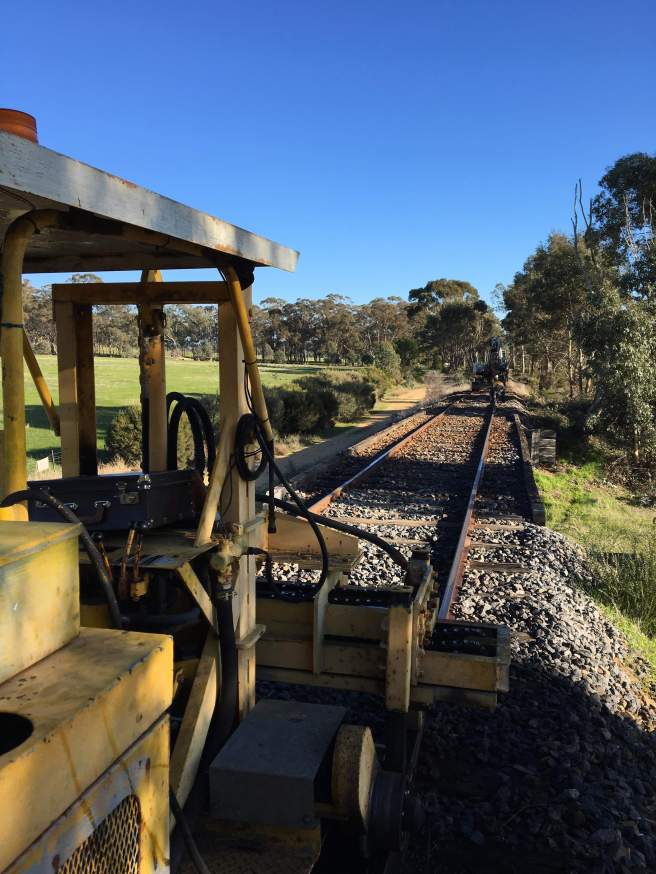 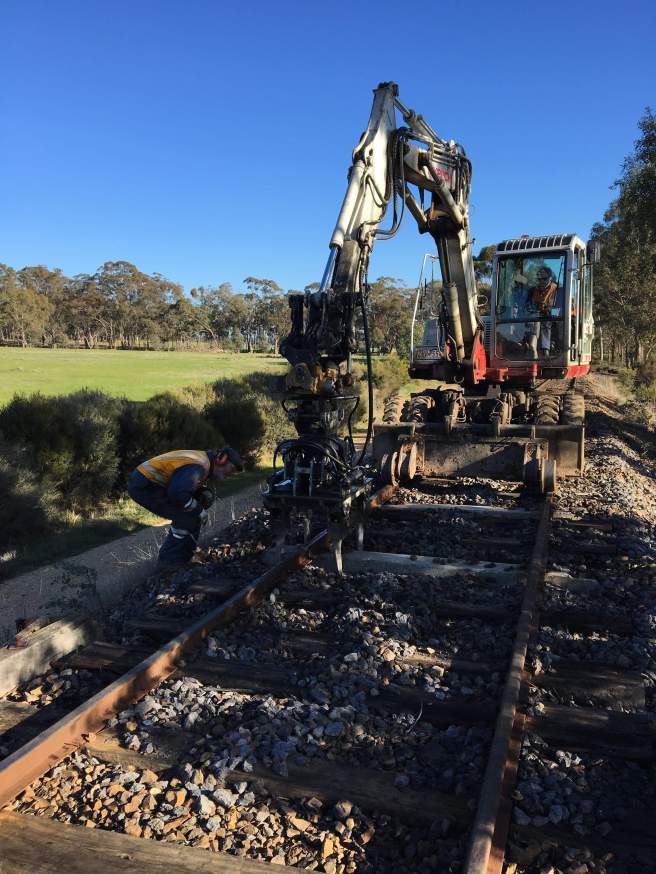 The last 24 sleepers were in just as the clipping up gang caught up. The perfect time to declare morning tea.

Our recent progress is an excellent indication that our aim of having 2000 concrete sleepers in our track by year’s end is quite realistic. 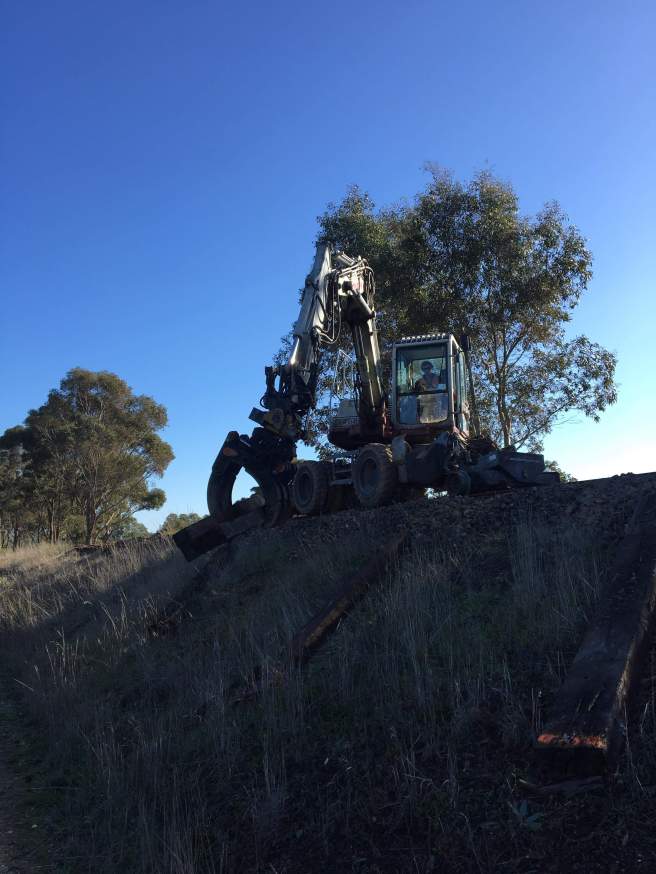 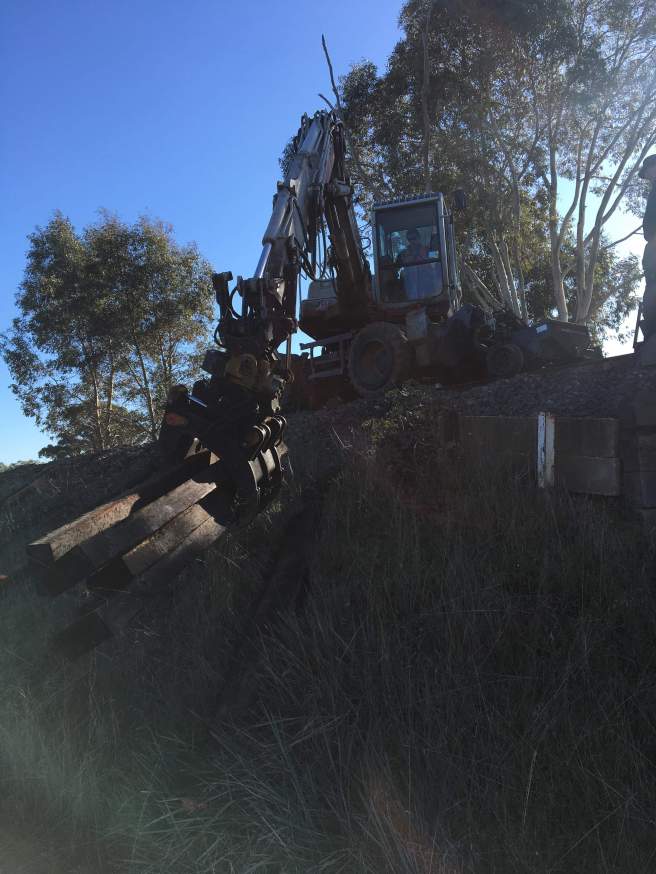 After clipping up the task was to bundle up and strap the reusable removed timber. 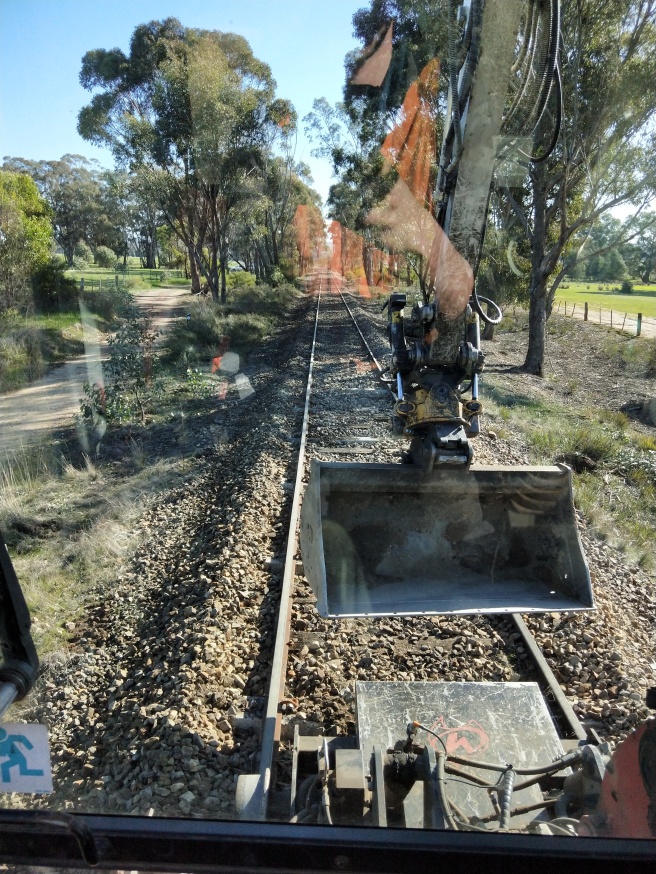 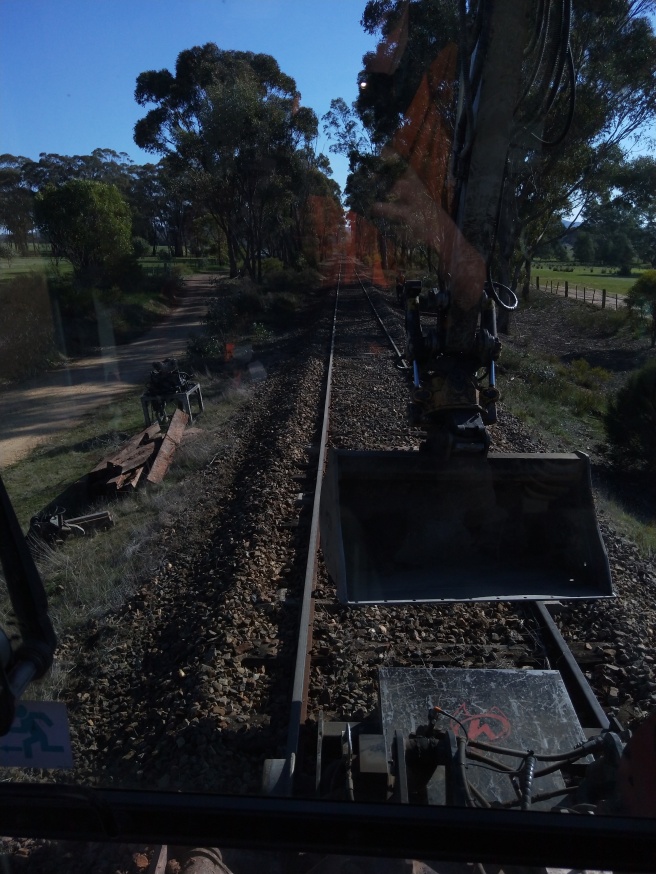 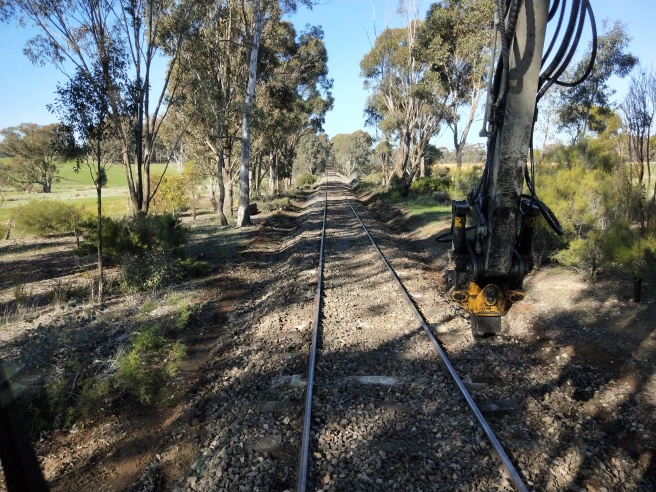 Some ballast scraping, a final tamp and some dip removal has left this section looking very smart.

Tomorrow will see 272 concrete sleepers dropped out for the next section. The train will leave Maldon around 8 and we’ll be out by Farmer’s Bridge from 8.30.