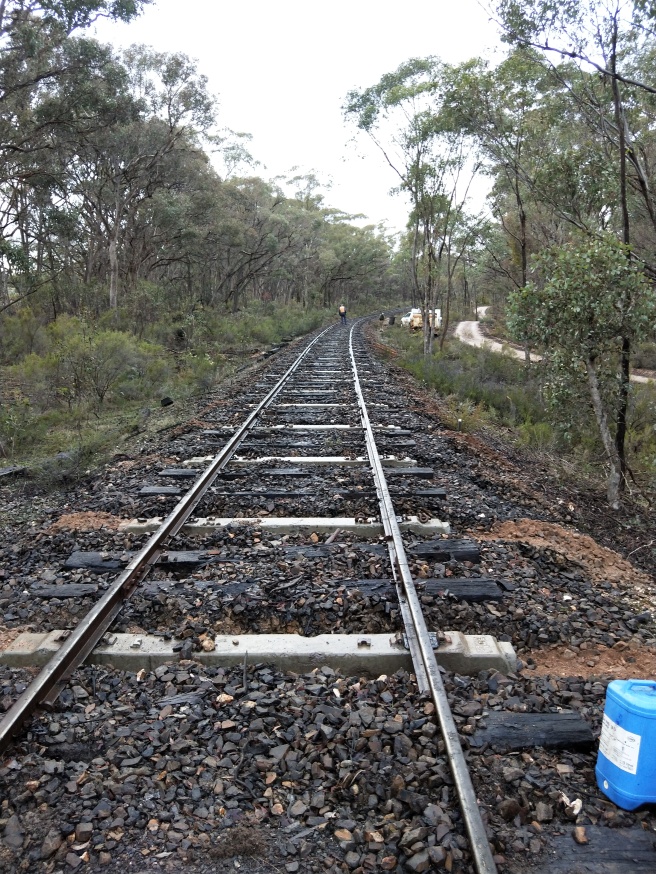 Today saw the last curve on the whole line receive either concrete sleepers or heavier rail. A big achievement. 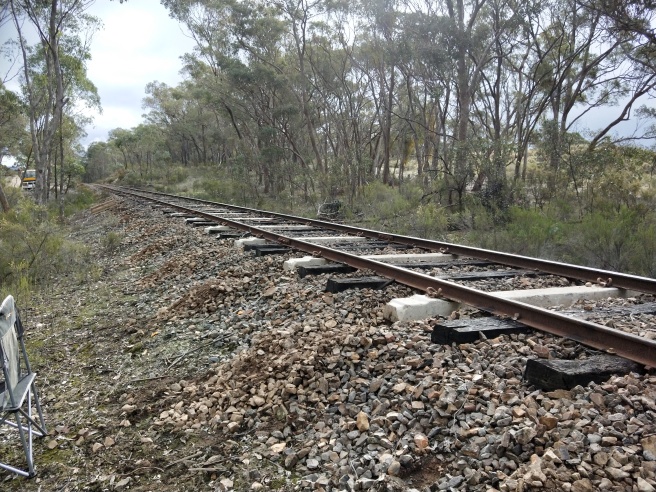 We flew through clipping up the remaining 50 or so sleepers, being well completed by lunch.

After which we turned our attention to ballast scraping and tamping.

This whole curve has had issues with cant (superelevation / cross fall) for a long time. We’ve tried spot corrections, which helped but we still had sections of negative cant and generally little to none elsewhere (less than desirable).

So we set about putting a track jack at every single concrete sleeper in the curve and jacking until the cross fall was around 25mm – a big job on this long long curve.

We were also corrected any dips that we came across. By the end of the curve we had a sensational system going to race the jacks along the job, largely carried our by our prison assistance, we’d certainly be struggling without them on these sorts of jobs.

But the end result was a stunning curve, beautifully smooth (a few crippled rails let it down unfortunately) and we’re incredibly proud, the best and the quickest curve we’ve completed to date.

Next week we’ll be sending our digger off to Daylesford to assist with some works on their railway.

However our usual gangs will still be running, with 80lb rail preparation on the cards for Thursday.

Another big day, with 116 concrete sleepers inserted into curve 11. 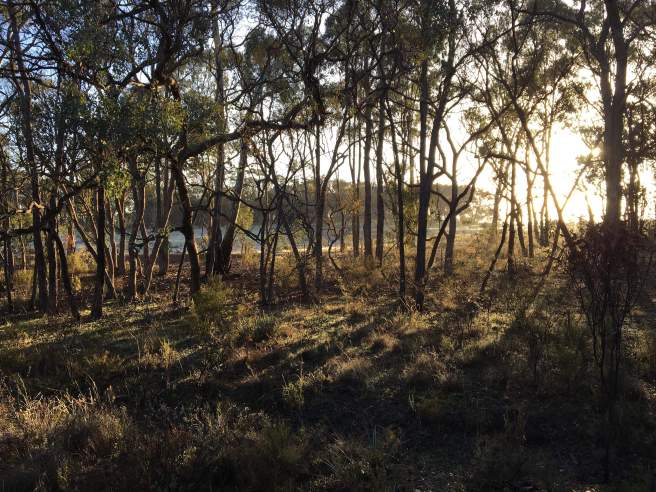 It started out as a very chilly, frosty day, turning to drizzle as the day went on. 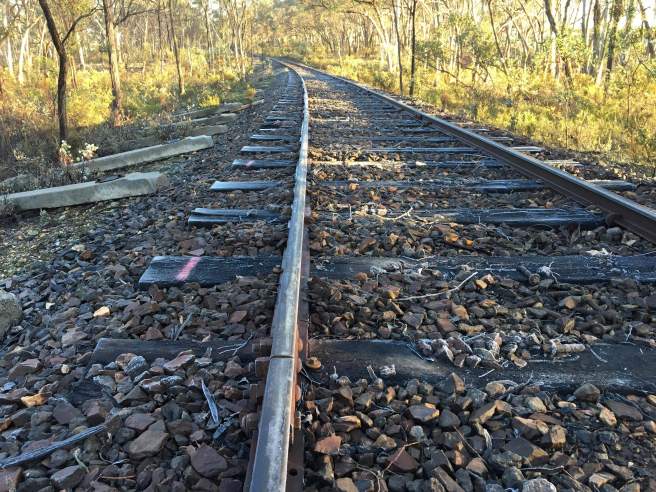 All the concretes had been distributed alongside earlier in the week, the sleepers to be changed marked up and we even managed to get a bit of a head start by removing a few screws. 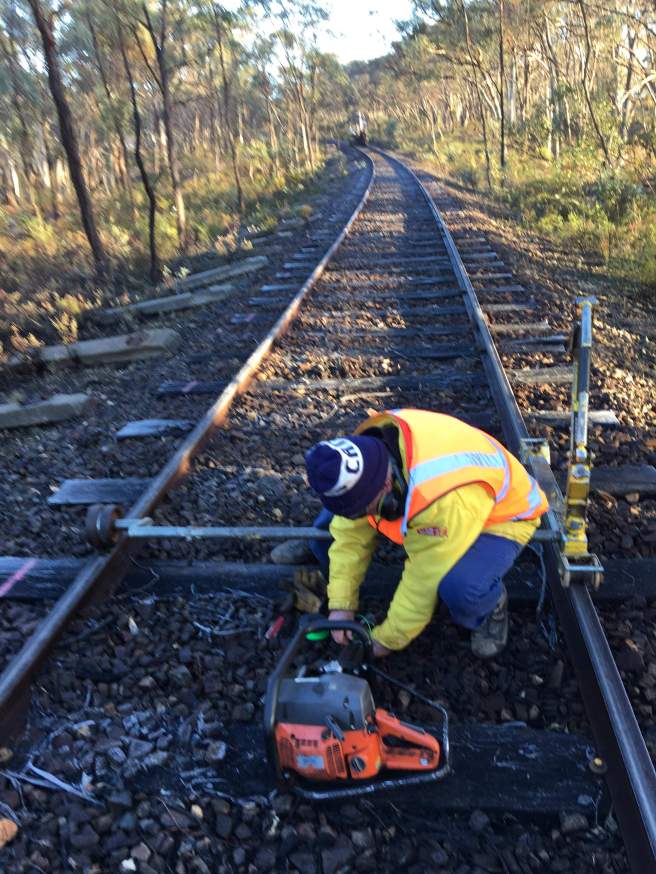 Leaving Clive to lug around the other gun manually.

Following close behind was the excavator, undertaking the 50mm lift.

We had 11 more sleepers than were needed for the curve, so we just continued on into the straight, meaning a few dog spikes required removal.

Sleepers under and jewellery dropped out ready for clipping up.

Tamping up the recently inserted sleepers to make the clipping up process much easier. 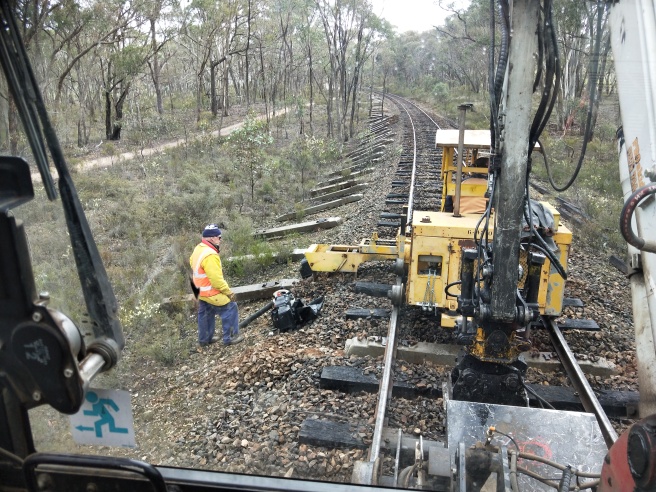 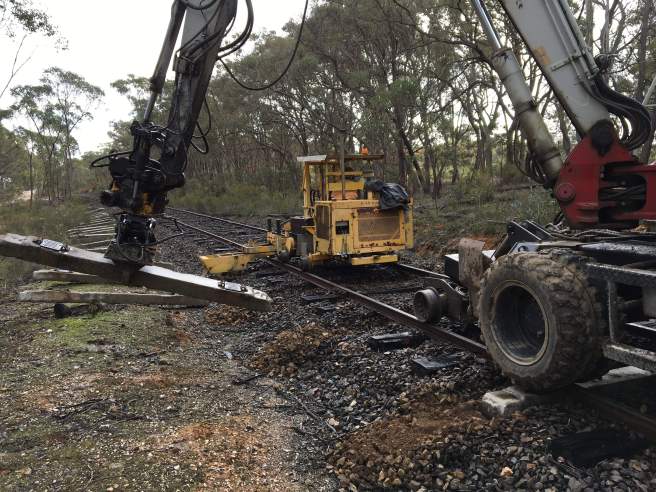 The scarifier and excavator spent most of the day in tandem, almost perfectly synchronized by the end of the day. 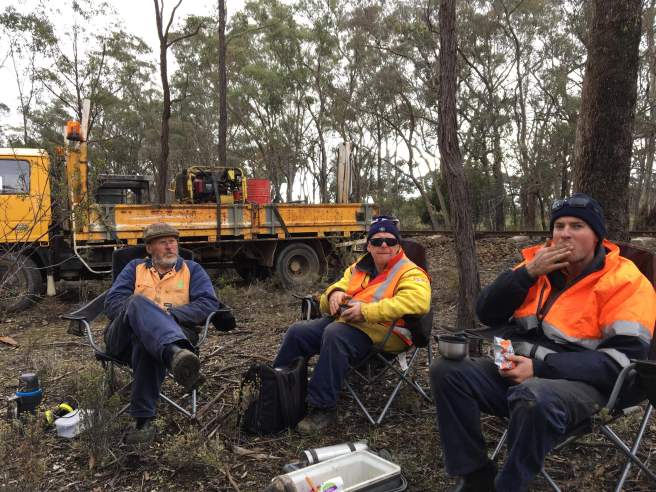 The all important lunch. The weather today was intermittent… However without fail everytime we sat down for a cuppa it rained! 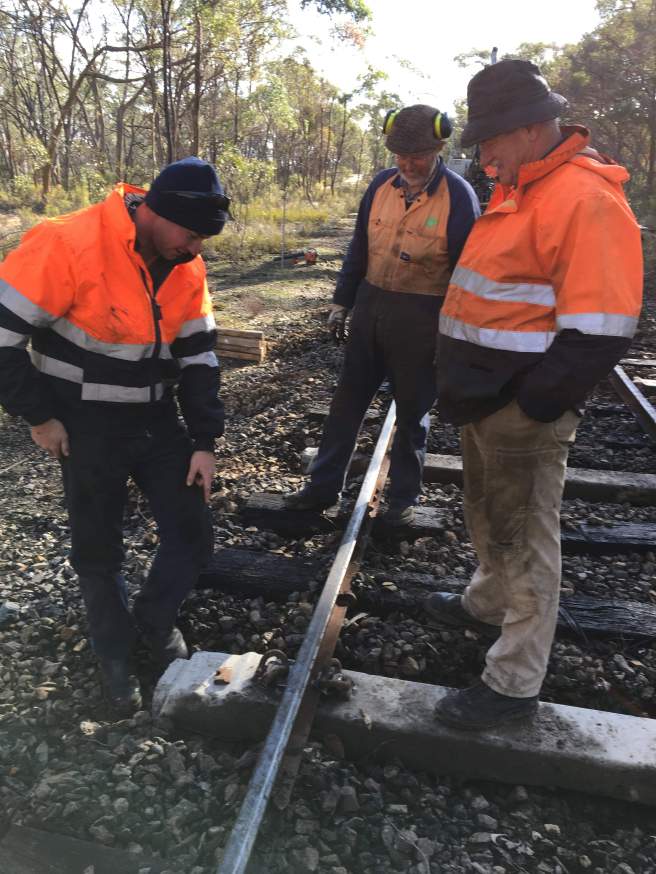 Will, Rolf and John very closely observing the fastening on this particular sleeper.

It’s a slight variation, whereby a different style of plastic biscuit is installed upside down in place of our manufactured biscuits, with a piece of flat bar placed on top for the pandrol clip to fasten onto. We think it’ll be a good alternative when we run out of old steel sleeper lugs.

And by days end we’d clipped up well over half the sleepers, leaving only a few hours work to finish off tomorrow. We’ll also make a start on bundling and strapping up the reusable timber removed. Meeting at Maldon 8am or on site from 8.30am. 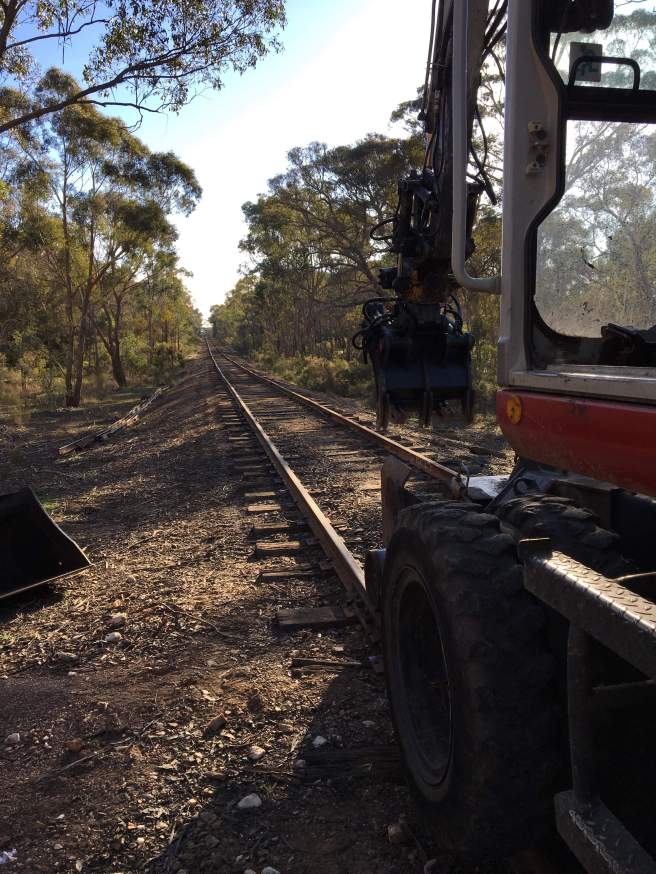 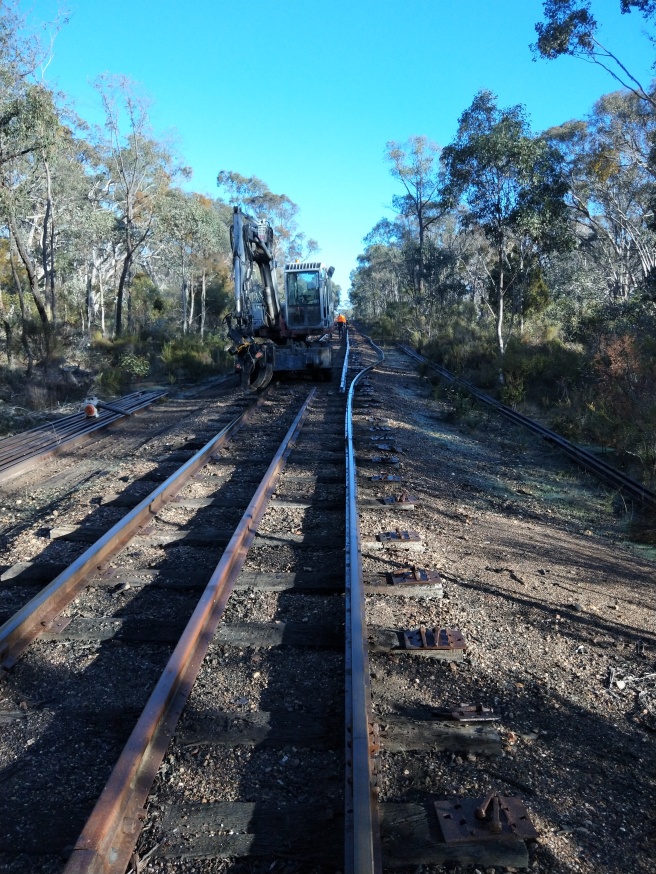 We got into the swing of things really quickly this morning, with all the old rail out of the way and the new in place well before morning tea.

The old trusty sleeper plate gap estimator when butting up the strings of rail still seems the most foolproof (the gap in this cooler weather is perfect).

The cut in location, right on the old tip road level crossing (not been a crossing for many years but names always seem to stick).

Thankfully it allowed us to remove the worst bit of rail on our whole system, bad foot wear from being in the crossing for many years. Gone now though. 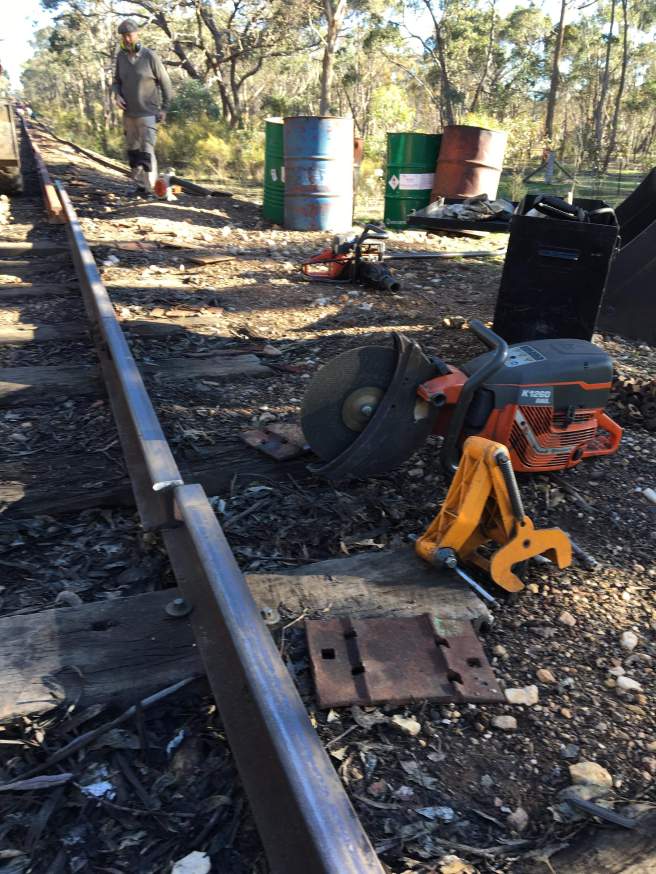 Cutting out the old failing 60lb.

Bolting in the correct length closure that is in much better condition. 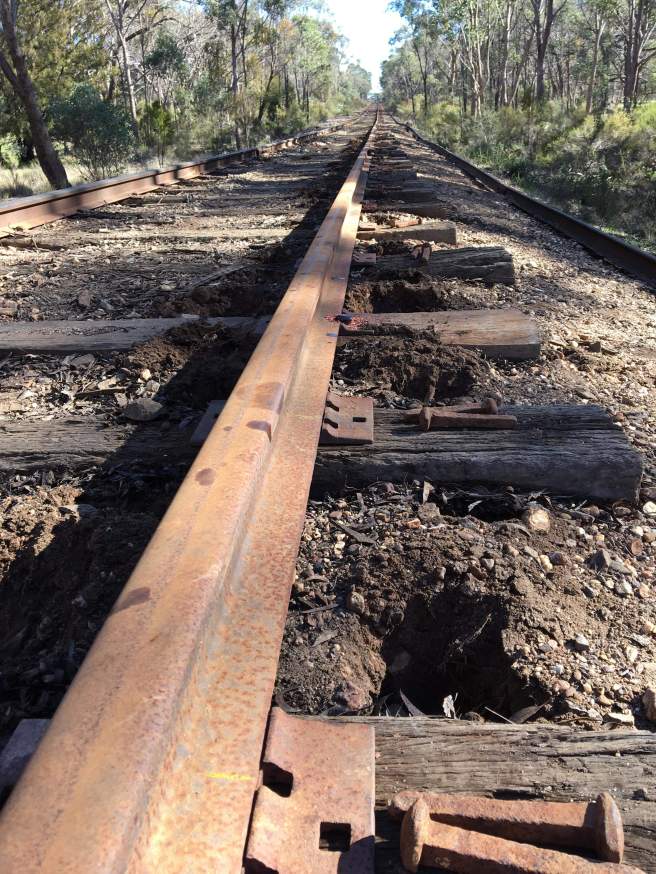 The 1 in 3 spiking was completed by lunch, a pretty good effort given we ended up installing 14 80lb rails (we found 2 more leftover from re-railing jobs nearby). 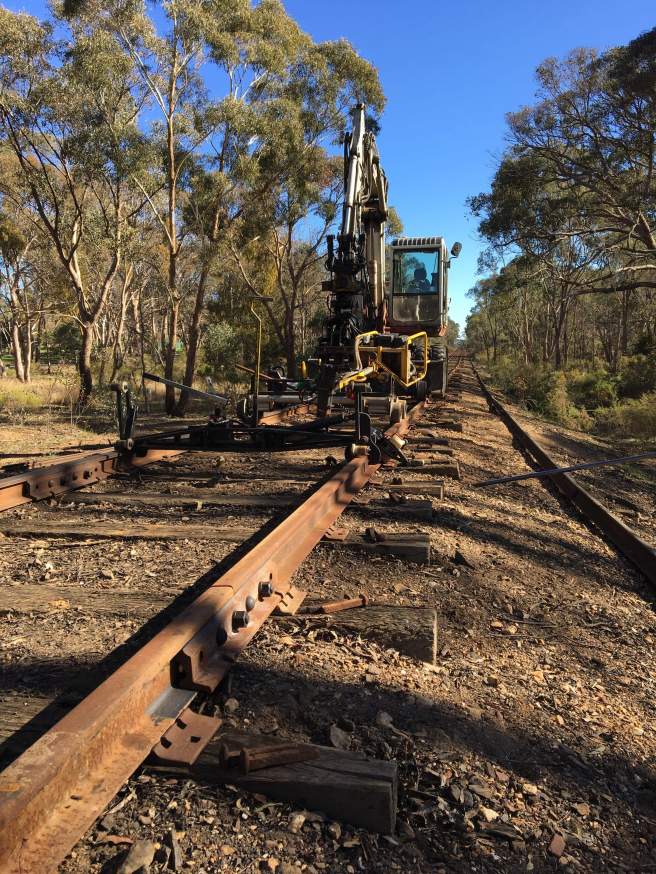 The tamper was hot on the heels of the first spiking pass, with the drilling of the intermediates not much further behind.

Only a few weeks ago, our team were chasing the shade, now we’re desperately seeking sun.

The final spiking pass was completed in no time, with the crew then diverted onto breaking up the old 60lb into manageable lengths and collecting all the old jewellery. 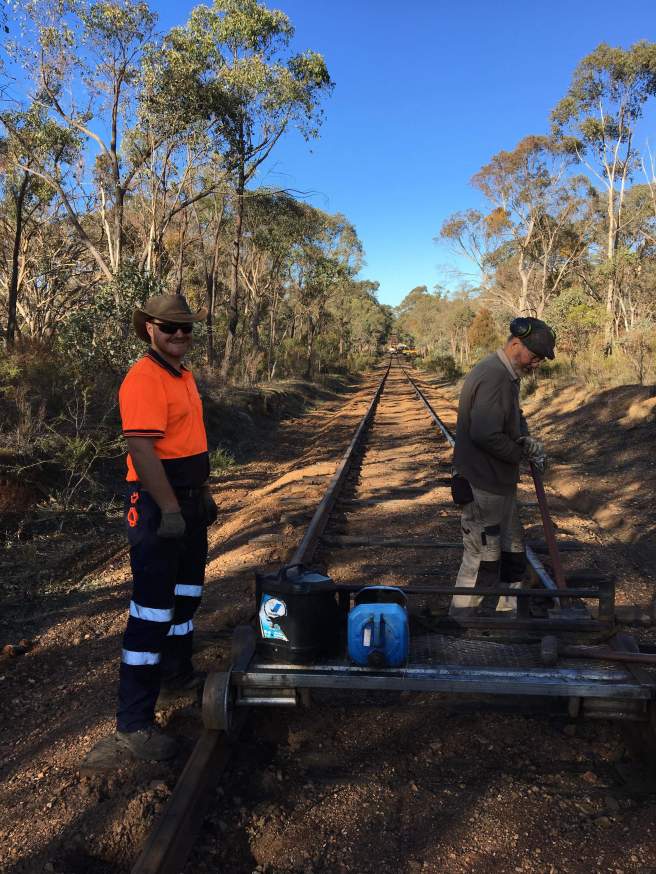 A final anchoring pass saw the job complete (still a few anchors to go but not many). We even had an extra pair of hands today, Will from the Yarra Valley Railway, coming to see how we do our thing.

Tomorrow’s crew will be starting the first half of our 6 monthly track walk / detailed inspection. We’re not planning on finding anything serious but if you’re interested in finding out just what it is we look for / at, you’re welcome to join us, leaving Maldon at 8am.

Another very successful day. Even with our much smaller crew today, we managed to comfortably install a further 3 lengths of 80lb (takes us to 22 installed this week) as well as break up some 60lb and tidy up the completed section. 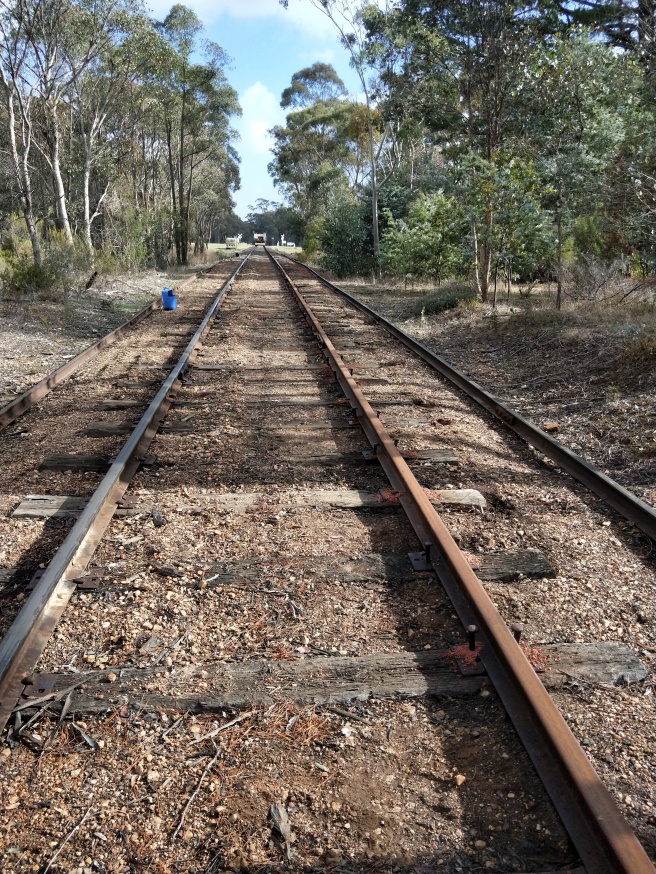 Lunch time saw an end to all the drilling and spiking as well as having the new railed joined up to the old.

After a quick tamp through the whole length and lifting out a big dip through one of the muddier sections, this bit of track is looking very smart.

Next Thursday we’ll be back here finishing off what we didn’t get to this week. We’ve only got 12 rails to go so we should comfortably knock it over in a day.